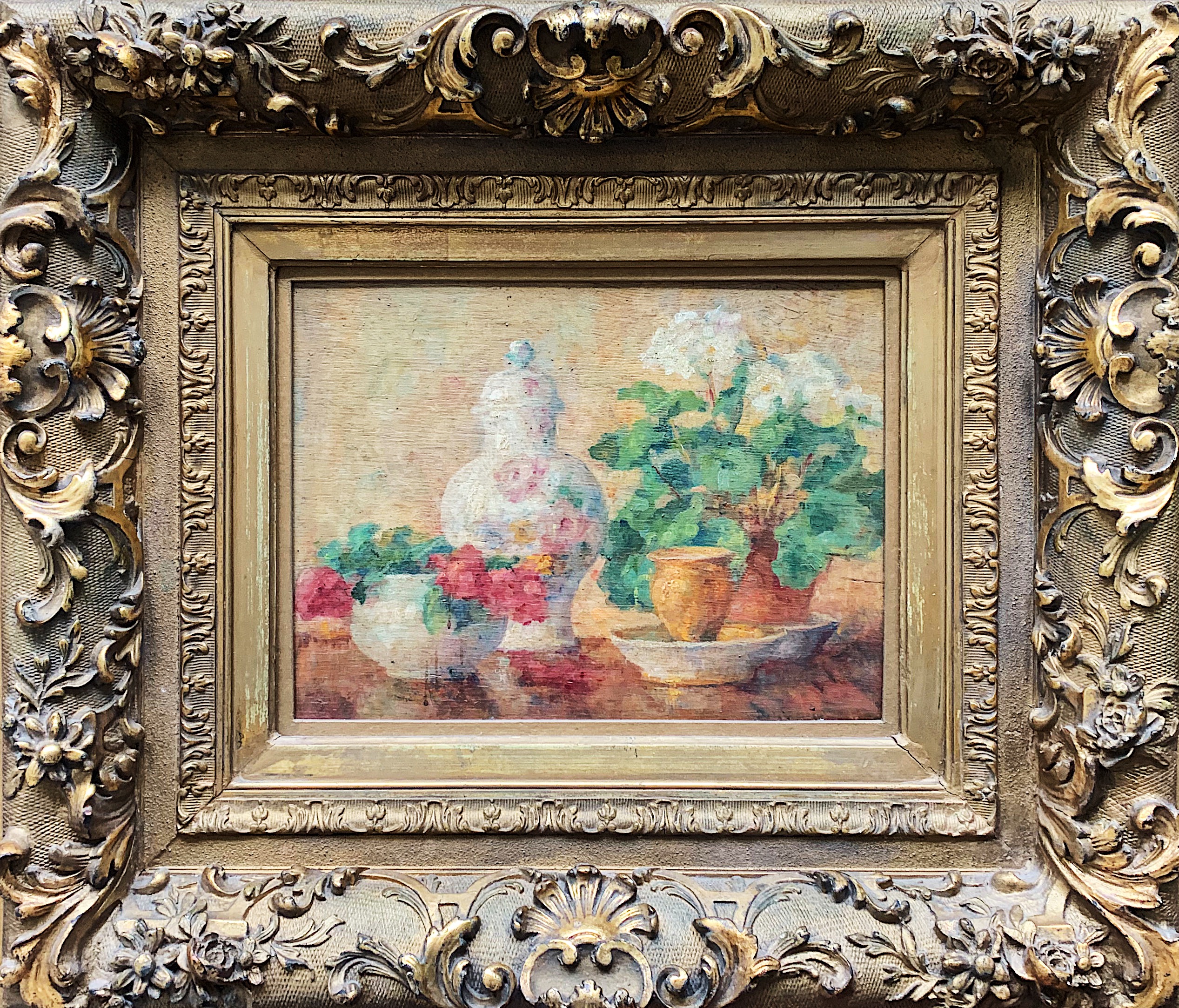 On the smooth, brownish table top there is a group of objects, mainly porcelain dishes. From the left we see a white vase with a bouquet of wilting (a few petals fell on the table top) of dark pink roses with green leaves, behind it a small vase with a lid, white with a decoration with pale pink flowers. On the right, in the front, in a small white bowl-stand, a yellowish-orange pot-vase with a handle, and in the back, in a similar bowl, a brick-red pot with white geraniums with large green leaves. Objects are reflected in the glossy table top. Neutral, brownish-yellowish-grayish background.

The painting is the work of Olga Boznańska (born in 19865 in Krakow - died in 1940 in Paris). After the initial drawing lessons from her mother, Eugenia Mondan, the artist continued her studies privately with K. Pochwalski, J. Siedlecki, and later H. Lipiński and A. Piotrowski. At the Higher Courses for Women Adrian Baraniecki listened to Konstanty Górski's lectures on the history of art. In the years 1886-1889 at the Munich Academy with Karol Kricheldorf and Wilhelm Dürr. There, she set up her own studio and lived for the next nine years, going on longer stays to Krakow, France and Switzerland. In 1895 she started working as the head of the private painting school of T. Hummel. She rejected the position of head of the painting department at the School of Fine Arts in Krakow, proposed by J. Fałat, and in 1898 she moved permanently to Paris. From 1886 she presented her works at numerous exhibitions at home and abroad in Europe, America and Japan. She has received numerous awards and decorations. She was a member of many significant Polish and European artistic associations. She painted portraits, still lifes, genre scenes in interiors and city landscapes. She paid attention primarily to color, using a limited range of colors, revealing later on clearly a passion for cool and gray-silver tones; it often did without the use of lines and contours. The auctioned painting is an interesting example of one of the main thematic trends in Boznańska's art. Still lifes, initially created between orders for portraits, are also an important part of the artist's work. With time, she painted more and more compositions with flowers, often with wilting ones (the theme of wilting roses also appeared in the presented work).

The work was probably created at the turn of the 19th and 20th centuries. It presents a lighter tone and a soft and material painting texture. The objectivity of the objects, vessels and flowers shown here has not been obliterated, contrary to the impressionistic methods. In this painting, Boznańska uses a lightened range of colors, and the touches of her brush are direct. With mastery, he puts a stain, getting closer to the technique of the old masters. In this way, he takes advantage of certain experiences of post-impressionism. A very similar way of showing bright still lifes in interiors full of light can be found in two representations of the interior of the artist's studio, created in 1906 in her family house in Krakow at ul. Wolska 21 (both at the National Museum in Krakow). Certain analogies in the composition, method of painting and colors also appeared in some of Boznańska's still lifes from the 1890s (e.g. "Still Life with Grapes and a Cup", after 1890, private property; "Still Life with an Alarm Clock", after 1890, National Museum in Kielce).

- expert opinion in the field of painting
- Artbidy certificate

Other objects
No data to display